No, the new four letter word

I've been spending the day running around (metaphorically, actually I've been sitting on my ass in front of my computer) trying to get a bunch of places to let us shoot there for free. Apparently, even in this economy, free is too cheap.  The city of NY is pretty great about this stuff, so Central Park and other public locations were fairly simple to get. It is every single other location possible, including a shot of someone grabbing a book from a shelf at the library, that apparently is just impossible to get.  Like really? We're not shooting an action movie. There are no explosives. What's the big deal?

In non work news, I'm hungry. Since I've been working all day I haven't really eaten anything. I also am still sitting here in my pj's.  Apparently both working and functioning as a human being  is a stretch.  So I guess that wasn't non work news after all.  Umm. The cats are being cute. That is completely not work related, as they are cute all the time. That is when they're not destroying things. 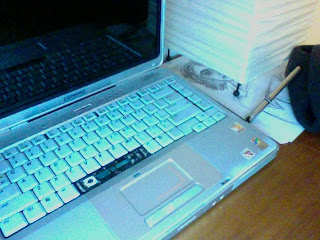 The space bar used to be there. I'm haven't settled on a culprit yet, but I'm pretty sure whoever did it doesn't have opposable thumbs. Just an educated guess.
Posted by Lu at 4:54 PM