I haven't been updating here as much because I've been writing elsewhere, namely on Associated Content. I love them because they pay me. Not a lot (oh no, not a lot).  But it's still kind of exciting to make anything for writing.  It kind of brings back my childhood dream to be an author one day.  So, anyway, check me out there and sign up yourself if you want!  It's a great way to make a little extra spending money.
Posted by Lu at 8:49 PM No comments:

I've been dancing around like an idiot to this song for the past half hour (I loop songs I like. The people around me really appreciate this trait).
Posted by Lu at 12:06 AM No comments:

Ok, my cat is insane. And I'm trying to be understanding and supportive but for real, I think she has PTSD or something.  Let me give you a bit of backstory:

She's super sweet. Very tolerant. I can hold her up on two legs (not that I do...much), play with her paws, poke at her and just basically make a pain of myself at her expense and she is fine with it. Maybe an occasional pitiful meow, but that's it.  Laziness totally wins out against aggression in her, any day.

Whenever she sees a cage she totally freaks out. Hissing, spitting, clawing, the whole thing.  You can't even get near her (I laugh at the people who suggest wrapping her in a towel first - if you get within 10 feet of her she's got her paw on the nuclear device panel and any closer and she detonates. She does not make empty threats).  It has taken me and my boyfriend together, wearing thick winter coats for protection and with multiple towels to get her into a cage. And it took hours. I do not joke. Hours. She has come close to reducing the two of us to frustrated tears.  It's like waterboarding, but worst.

And she stays like that for hours, if not days.  She especially can't stand even seeing the face of her sweet sister cat who she normally curls up and gossips with.  It's like Lindsay Lohan just saw her father waiting with a camera crew - it's that bad.

I believe this dates back to when we got her fixed.  That was the first time she ever really got carted off in a cage and I don't think she ever got over it.  Why she associates her sister with that, I don't know - maybe Shiale sold her out for a few extra minutes intact.  Who knows. I wasn't there. That day is behind a dark curtain for me, and I prefer to leave it there.

Now, that brings us to today.  For no reason that I can make out, as there was not a cage in sight, she flipped her shit a few hours ago and has, after yowling and growling from the windowsill for a while, retreated to behind my oven.  She took a break from hiding there to knock down my leftover (arugula, gorgonzola, spinach and potato) pizza. Bitch.  She's also managed to tear off a piece of the radiator that goes along that wall. Superb. At least it's summer.

Up until the destruction I was feeling very patient and tolerant about the whole thing. Poor thing, she's obviously having some kind of Vietnam style flashback.  It will pass. But that pizza was delicious, you guys. And I don't know how easy/hard it will be to put the heater/radiator back together. I am not super handy like that.

(Note: She has extracted herself from the oven area and is now in the doorway hissing at myself and Shiale.  Charming.)

So WTF? Am I the only one whose cat is out of its mind? What can I do to snap her out of it?  It's super, super annoying. It's like she goes feral or something.

Edited to add: Now she's in the hall in front of the bathroom and front door. Hopefully I don't have to exit/pee anytime soon.
Posted by Lu at 11:23 PM 2 comments:

Today I made the easiest dessert known to man.  So good. So easy. Sigh. 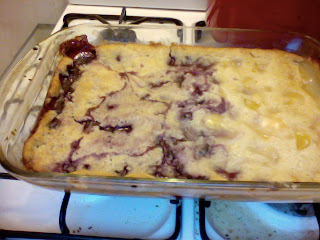 It's half peach, half blackberry. I like the blackberry half better. In the interests of science though I will eat both sides to make sure that the peach doesn't eventually win out.  It's sooooo good.

I got the recipe from a good friend. All it takes is 1 of everything =
1 stick of butter
1 cup of self rising flour, milk and sugar
Fruit

Mix the non-fruit together first, pour it into the pan you're baking it in (or mix it in the pan to begin with, as I do to save dishes), then pour the fruit over and give it a gentle stir.  It doesn't have to be perfectly mixed. Stick it in the oven and bake at 350 until the edges get a little brown. It will probably still be bubbling in the middle, so don't worry about that. Let it cool down a little and then eat!
Posted by Lu at 8:14 PM No comments: