I don't know what the dish I'm making today is called, but it's warm and filling, and with the weather getting colder every day it seemed like a perfect time to make it. It's kind of like the Italian version of egg drop soup, I guess.


Don't let the picture scare you - it was taken on the computer. It actually looks more appetizing in person. 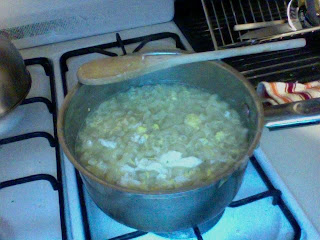 First you boil some water (maybe a little less than normal, not much), salt as normal, and add the pasta. Little macaroni noodles or something small that can scoop up some broth is good. Spaghetti is probably not the best pasta for this dish.  Once the pasta is getting close to being done, break a couple eggs, as many as you feel like, into the boiling water and stir it around gently, so the egg breaks up but you're not actually beating it into the water.  Add a bunch of grated parmesan cheese to the water (generous sprinkling on the water, add until you like the taste), and season it with black pepper.  Stir it all up.  The egg, cheese, pepper and salt you added earlier is what flavors the water and makes the "broth." I've never tried it with actual chicken broth, who knows, it might be good. Then just wait for the pasta to be ready and instead of draining it take it off the heat and serve it like soup. 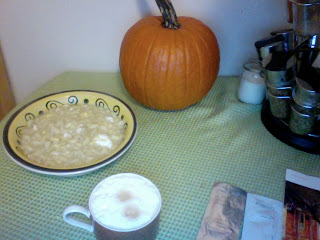 Lunch! Hot soup and a cappuccino.  Oh, and the pumpkin will eventually be both pie and a jack o lantern, so stay tuned for that :-).
Posted by Lu at 2:46 PM