I've spent the afternoon (among other things) with a big pot of turkey broth stewing.  I LOVE making broth.  It feels so healthy and wintery, and yet is so simple any idiot could make it. 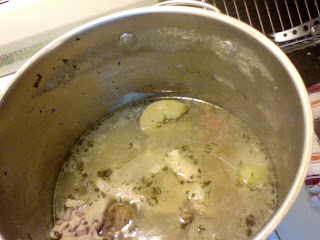 I've already poured out a good bit of the broth from the pot here to boil some rice in.

Basically, throw in your protein (half a chicken should do, or in this case a big humongous turkey wing)
1 potato, washed, sliced in half
1 piece of celery
1 carrot, washed (optional: peeling)
1 onion, peeled
3 cloves of garlic, peeled
Salt (maybe 2 teaspoons? To taste, basically)
Pepper, just a little less than the salt
1 or 2 Bay Leaves
Healthy dash of Basil (To taste, maybe a tablespoon)
Healthy dash of Thyme (Likewise)
You can put a teaspoon full of tomato sauce if you want (my cousin does) but I usually don't bother.

Let it simmer at a medium - low temperature for 3 or 4 or 5 hours with the lid on, depending on how intense you want the broth flavor. I like it intense. I usually have to add a cup or two of water at some point so that it doesn't all boil away.  Don't do this at the very end or (I find) the flavor will be diluted, but if you add some water at the 2 hour mark or so it shouldn't make any difference really.  And if you're cooking something for four hours, you want enough for leftovers.  Taste it every now and then and if it isn't flavorful enough by the three hour mark add more of the salt/pepper/herbs.

Once the broth is done to your taste, just filter out all the stuff in it and you end up with delicious, rich broth. I then usually cook some rice or ravioli or orzo or something in it and eat it.  It's full of vitamins and very filling.  You can save all the stuff you filtered out (potato, protein, etc.) and just eat that separately.  Or you can leave it all together and have a stew instead of a broth. Whatever; it's still good.  I'm going to go eat some now. 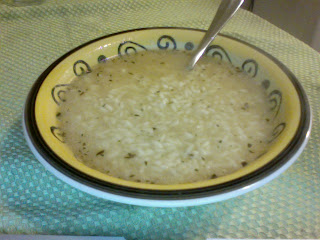