Rolling my way into the New Year

I love Christmas. I love buying gifts (not the financial part so much this year), I love getting gifts (oh yes I do. I am five when it comes to opening gifts), I love the food and the good will and getting to see friends and family.  This year has been wonderful. I spent Christmas Eve cooking.

I made:
Chicken.
Stuffing. Lots of stuffing. I mean I lifted the skin of the chicken and stuffed it there too. There's more stuffing then chicken.
Mashed Potatoes
Wild Rice
Spinach
Stuffed Mushrooms
Cornbread
2 Key Lime Pies
Cheese and bread and salame to start off with.

This was all for me and my boyfriend.  We did not get to the pie, which was fine because I planned to bring one each to my friend and my boyfriend's family.  I also made baked cucumber, but am not counting that because I thought it was zucchini.  Oops. My boyfriend just about fell off his chair when he realized, and he got an inordinate amount of enjoyment retelling this to family and friends. Just one more little Christmas gift for him, I guess.

I also did not really get around to decorating the tree, since my bf brought it over on the 23rd and I was busy shopping and cooking. It is still really cute though. 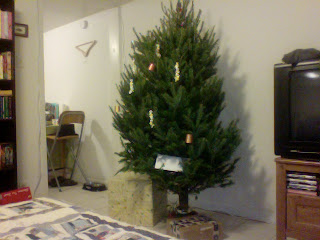 There were eventually a few more gifts under it.  The large package, a bread maker for my bf, did not end up going over well so we're going to go exchange it at some point this week. I knew it was a risky gift but he does like to bake his own bread...oh well. Not every gift can be a winner.

Christmas itself was spent with a great friend, a former college room mate, at her mom's house. Which I love because it is just so cozy and comfortable.  They know how to do Christmas right, too. We had a big brunch, with liberal applications of mimosa added in. Then we went for a walk to make more room and continued on to pie and wine. Then more wine. Then beer. Then drinking games (with more beer).  The drinking game, by the way, accompanied what is perhaps the worst movie ever produced, Saving Sara Caine.  Oh god.

In between all this we exchanged gifts (I got a belated birthday gift and more wine).  Then we staggered back to the train to get back to NY after a wholly satisfying day.  The next day we were back on the train to head to my bf's family.  I slept on the train, and also on the armchair after a large dinner at a nearby Chinese restaurant (one of those places where the chef sets the table on fire and flings hot food towards your face.  Fun, but a little daunting if you know yourself to be, say, just slightly klutzy).  There was a good deal of wine on offer here too.

So, basically, I have taken the first steps to a lifelong problem with alcohol this holiday season. Ok, not really, but how do recovering addicts do it? If any more alcohol had been flung down my throat I would have had to swim home instead of taking the train.  Which is just how I like my holiday celebrations.  Lots of food, drink, friends and family.  So Merry belated Christmas (and Hanukah and Kwanzaa and etc.) to everyone and I hope everyone had as good a time as me.