Hunting for Cheap Airfare to and within Europe 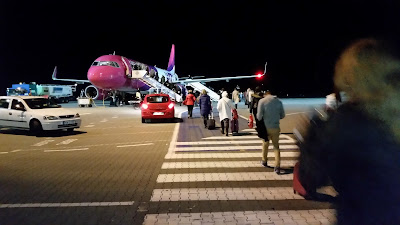 Ok. Rarely can I say that I have knowledge to pass on, but I'm feeling confident about this one. At least if you're an American - Europeans, you probably know all this plus another 5 airlines I haven't heard of. But, for those among you who don't live in Europe, let me tell you how very very cheap it is to fly within Europe. It costs less than a train ticket. It costs less than a tank of gas. In fact, they come very near to paying YOU for travel. The key is buying tickets early - last minute tickets are almost normal price, but if you pre-plan a bit you can get crazy deals.

For example, I got a ticket from one country in Europe to another just this month for about $16 American dollars. An almost 3 hour flight, for less than what the cost of US minimum wage would be if the airplane was a fast food worker. So cheap.  I've put together a short list below of the discount airlines I know about (I almost wrote bare bottom price airlines, but then began to doubt whether that was actually a saying - it sounds wrong, right?).

Ryan Air: This one is Scottish and I've flown it a bunch of times. Like all the other airlines on this list you pay for food, drink, checked luggage and even for printing a boarding pass at the airport. But as long as you can get everything into a carryon bag and you have a printer at home, it is very very cheap.

EasyJet: See above. Except I'm not sure if they charge you for boarding passes - wouldn't surprise me though. Still, cheap and easy.

WizzAir: This is one where I think they maybe should have done a little more work on the name, since it makes me think of nothing more than peeing. However, that aside, it is the source of my magical $16 ticket so, again, very cheap. Double check your carryon though - it has VERY small carry on limits, even smaller than Ryanair or Easyjet and I ended up paying to check a bag. Also, they  will actively try to sell you things like lottery tickets on the flight. If you can ignore that, go for it.

Norwegian Air : If you fly from a major city like New York or Miami, you can get very cheap tickets to Europe on this airline. I bought a one way ticket to Oslo for $179.  There were tickets even cheaper than that. They fly to several European hubs, including London, but for that bare bottom (I'm going for it - I'm hoping it's a real expression) price you don't get a checked bag or food on the flight. I bought a sandwich and bottle of water at the airport to bring with me, and used a large carry on instead. Worth it. Even if you do end up paying for a checked bag, it's still a good price.
Posted by Lu at 5:42 PM